Is SDG No. 5 Actually About Gender Equality?

Gender Equality, is this a dreamy liberal agenda or a serious profound problem we need to face?

Well, it is always hard to answer. If you ask women, they will instantly associate their replies with all those inequalities they have collectively faced within society, even today.

An overused statistic of the measured societal bias against the female half of the population should be spotlighted here to showcase our instant shared reaction.

“Based on data between 2000 and 2016 from about 90 countries, women spend roughly three times as many hours in unpaid domestic and care work as men.” 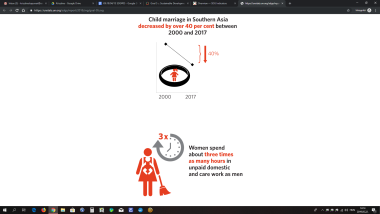 I am well aware this sounds like a broken record, but the fact is: it is, unfortunately, still a fact today.

Also, many can argue, as a woman, I naturally drown in sympathies associated with issues immersing fellow women.

To be honest, after self-checking, yes, that is true.

So, for the first time in my life, I made myself look into this situation (as much as I could) as a man. I was well-aware of what was paining my folks on this side of the gender divide, so it was about time I put myself in the other side’s shoes.

It didn’t occur to me till today, that SDG 5, labelled Gender Equality, has only targets regarding problems of women to be reached by 2030.

We can argue, this is to eliminate specific issues women are faced with to at least less sickening levels, and to bring back a little bit more gender-neutral balance to societal life to start with. Others can argue, this is an example of how men are discriminated against. Yes, even under Gender Equality SDG targets.

Instead of being short-sighted, overly annoyed, or siding with males or females, I seek understanding.

Historically, women were left out of politics, decision making on both societal and household levels, education, etc. These issues are all getting slowly better nowadays, at least seemingly. We can celebrate this.

An average person thinking about gender issues is naturally calculating a balance between women and men. If it continues this way, it will always be a zero-sum game, where the gain of one is the loss of the other.

If we take game-theory to support our analysis of Gender Equality, we can see that Pareto optimum has not been reached yet and there is still room for improvements that can be gained for both women AND men, and even for other spectrums of gender.

Instead of on one or the other, the only thing we need to do is to focus our attention on the whole.

Being a huge advocate of SDGs, today’s paradigm switch made me realize an important thing: even though current SDG 5 targets are important to the whole and won’t reduce the well-being of men, we are not looking for “Pareto improvements” on the other side just yet.

And that is sending a very bad message.

If we assume men agree that letting women into education, politics, decision making/influencing, etc. is not a loss for men’s well-being, we can agree that mainstream gender equality goals, even on a global level are one-sided, are a threat to men’s equality.

This second phenomenon is as hurtful as thinking that giving women equality is disadvantageous to men.

Not having taken into account men’s issues in Gender Equality is aggravating me. I don’t want to argue that women have many more issues against their gender, and they have existed much longer etc. Even if we were to assume it is true, what difference would it make today if we exclude problems from our goal list that are potentially targeting the male half of the population?

My argument here is the same. It is not a zero-sum game.

Caring about issues that discriminate against men won’t increase inequalities for women.

I mean, we should pay attention to all issues, at least proportionately, as they occur in society.

Women can only gain if the Gender Gap Index is expanded, from mainly measuring woman issues, to include all gender issues. Perhaps males would stand behind it more if it, not only measured statistics highlighting one part of the population but, provided a full picture.

Wouldn’t it be better to also deal with issues only men are facing for everyone such as higher suicide rate, homelessness, and paternity fraud?

My opinion is, using the Marshall cross I learned as an economist, equilibrium is dynamic.

On the way to the point of balance, first, we usually overshoot it, and then get a bit closer, as we get closer and closer to it.

I believe that men are sensing this overstepping and that is why some decide not to back women who fight for their equality. Also, I believe, some women are overstepping way too far from the imaginary line in the middle. 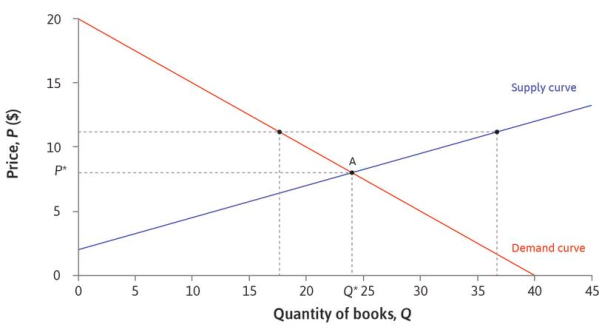 So, in a nutshell, regarding normal (price-sensitive) goods, if you increase Price, people want to buy less of the good (Quantity) and you will end up keeping your books on the shelves. As seen above, with the equilibrium price of 8 dollars, 24 books are sold, a.k.a. all of what is supplied. But with a higher price, it would be possible to produce more units than with a lower price (36 books) but there would be only 17 books sold due to less demand.

However, if there were more students and we were selling books at a university, for example, the demand curve would change, which would allow for a higher equilibrium allowing us to buy and sell more books. Or, if the demand was predicted to be the same, we would need the bookstore to buy less than the original stock of 24, to find the equilibrium again at a higher price. More precisely, only 17 would be needed.

Therefore, as in Economics, when measuring demand and supply in the market, and with Gender Equality, I welcome new participants in the arguments from both sides. As, according to the laws of the Marshall cross, they are all necessary to help us get closer to the desired balanced state eventually.

Our job is to keep extreme reactions, like physical and mental violence, out of the picture and to work on freeing ourselves up to accept all potential truths from opposing sides.

The opinions expressed by the author and those providing comments are theirs alone and do not necessarily reflect the views of #WAYSWF.

Get inspired to call for action reading articles on the Sustainable Development Goals that volunteers help write, proofread, edit, wordsmith, illustrate, manage and publish from AIESEC Alumni from around the world, and help us make the Global Goals famous by ordering our publications on Amazon and connecting with us on Facebook!